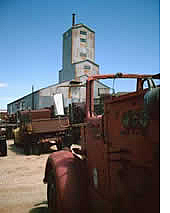 60 miles east of San Diego on Highway 94 in the township of Campo you will find collections
of history dating back over a century. For the History Buff, we supply physical evidence of what once was, for the tourist and the young, a glimpse into the too soon forgotten past.

We're called a Truck Museum,but we're more then that. Although we are a home for the preservation and restoration of more than 200 motor transport vehicles, we also have an eclectic collection of industrial equipment ranging from old belt drive machinery, single cylinder engines, electric generators, quarry mining equipment, rain makers, olive presses, anti-aircraft searchlight and even a custom built Model A log splitter to name a few.

At the Museum, the public not only view vehicles and equipment of the past, but have an opportunity to see the process and progress of their preservation and restoration. They can gain knowledge and understanding of the history of the Motor Transport Industry and the automotive pioneers, who have made a significant contribution towards its origin, development and progress.

We've spent more then 30 years accumulating history otherwise discarded or sold for scrap metal. Mack, International, Autocar, White, Federal, Nash and even Linn are a few of the names you'll find on the vehicles found here. Some have plans for restoration, some do not. Some are available for others to restore.  Why do we collect what some call junk? Much of our past has been lost or destroyed in the name of progress. This is our efforts to preserve old trucks and their history by providing a location to store, restore and maintain them, and appropriately display them to the general public. In turn, we hope to interest and inform the general public of the important heritage of the motor truck and the commercial transportation industry.

Besides preserving these articles of history, we also restore them. The Julian Stages are are examples. The Julian Historical Society contracted MTM to restore a Julian Stage, one of two vehicles that were used from 1912 to 1915 to carry passengers and cargo between Lakeside and Julian. The vehicle took three years to restore and the restoration work was performed by volunteers. The Stage now resides for viewing at the Julian Carriage House Museum and is driven in their annual 4th of July parade.

A second stage, a 1924 Cadillac, which is well into restoration, can now be seen at MTM and will be soon be completed. Several other trucks have been fully restored and are housed inside the Old Feldspar Mill, including the 1917 quad used in World War I and the 1923 3 1/2 ton chain drive Mack truck which was used in the movie "The Aviator". Museum members have raised the funds for a new building which we plan to use to house more restored vehicles and exhibits .

For those interested in research, we also have a library containing a broad range of archival information on early and some later model Motor Transport Vehicles as well as many varieties of industrial equipment. The library has an extensive archival collection such as service, technical and parts manuals, original brochures, photographs, periodicals, engineering studies, our very own, rather large collection of journals about the motor transport industry called the "Transport Pioneer" and more.

©2007 Motor Transport Museum  All mediums, photos and graphics belong to their respective owners.